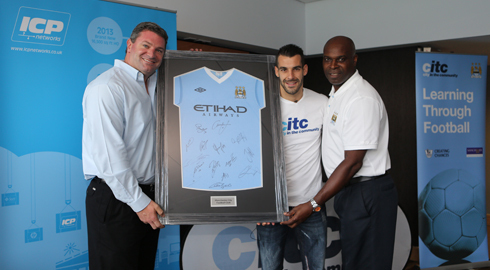 Manchester City and Spanish striking sensation Alvaro Negredo has welcomed ICP Networks and www.NetworkSupermarket.com after they agreed to sponsor the Premiership giants City In The Community program in a three year deal.

The South Manchester based IT giants will support CITC through a number of initiatives aimed at supporting young and vulnerable people across the North West.

ICP Networks have grown over the past ten years to become one of the premier solutions providers for networking and IT equipment in the UK and Europe – now they want to support the community that has supported them – and are proud to sign a three year deal with CITC to celebrate their first decade of success.

ICP Networks MD Matt Archer, said: “We are delighted to be joining the Manchester City team and are especially proud to support the CITC program. The work that CITC carry out in support local people is crucial, providing education to children who may otherwise not be interested, in providing activities that potentially deter youths from otherwise getting involved in anti-social activities or even crime.

“The CITC team work largely without recognition, they don’t do it for the plaudits, they do it because it really makes a difference to the people who need it most. The CITC program is in essence everything that Manchester City set out to be when they launched the Football Club in 1880, it is a support vehicle for the local community and we are proud to be able to join the team.”

ICP Networks have become of Europe’s premier networking solutions provider through the use their trailblazing bespoke stock management and asset recovery solutions. They buy, sell and rent – new and refurbished IT materials – at huge discounted prices from their 30,000 item inventory. 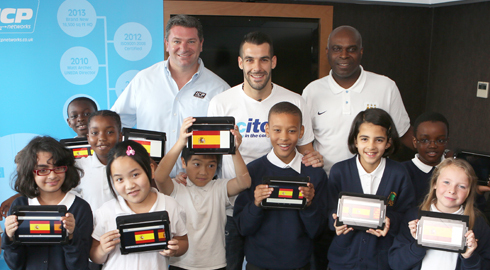 Earlier this year ICP Networks moved to a £1 million new headquarters in South Manchester – arguably the greenest IT HQ in Britain because of it’s eco-friendly construction. ICP Networks HQ has the largest solar panelled installation in the North West, a 50 kWp system that has provided more than twice the amount of energy required by ICP Networks.

“It has been a very proud year for us, the move into the headquarters will allow our business to grow whilst at the same time allowing us to further ICP Networks commitment to the environment,” Mr Archer added. “We are local people, we are a local company that employs local people and we are very proud of everything that we have achieved.

“We believe now is the right time to try and return some of our success back into the local community and the CITC program provides us with the perfect opportunity to do that. We have a number of initiatives planned with the CITC team, that will be revealed in due course that are very exciting for us both. We look forward to a long and successful partnership.”

NetworkSupermarket.com are a successful spin-off from ICP Networks. They will provide the best selection in Europe of SME networking and VOIP products on their e-commerce platform, which was launched this year.

Mike Green, Head of CITC Delivery and Alex Williams, MBE, CITC Ambassador, are delighted to welcome ICP Networks and www.NetworkSupermarket.com to the team.

Alex Williams, said: “We are proud to be associated with Matt Archer and the team at ICP Networks and www.NetworkSupermarket.com. They are a terrific business and we’ve found them a delight to work with so far. Matt has supported CITC through both ICP Networks and www.NetworkSupermarket.com by sponsoring the match ball at two Manchester City Premiership games.

“ICP Networks also supported the inaugural CITC Golf Day, ‘Blues on the Green’ and secured a piece of Manchester City history by purchased a corner flag from the title winning match with QPR, signed by the goal-scorers and the captain with all the proceeds going to support CITC. We are very proud of the work the CITC team achieve and to have the support of business like ICP Networks and www.NetworkSupermarket.com will ensure CITC grows from strength to strength.” 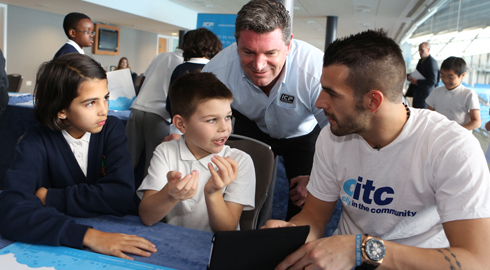 The Spanish world champion, who is likely to be heading to Brazil for the World Cup this summer, surprised the young people during their Spanish lesson – delivered for the first time ever on tablet computers – at the Etihad stadium. The tablets will also be used to deliver health and educational projects in primary schools across Manchester from January 2014.

This is the first of a number of initiatives made possible by the partnership with ICP Networks, all of which will aid CITC as they support the most in-need communities across Manchester.

ICP Networks MD Matt Archer commented: “ICP Networks have grown over the past ten years to become one of the premier solutions providers for networking and IT equipment in the UK and Europe.

Now we want to support the community that has supported us – and are proud to sign a three-year deal with CITC to celebrate their first decade of success.

We are delighted to be joining the Manchester City team and are especially proud to support theCITC program. It is in essence everything that Manchester City set out to be when they launched the Football Club in 1880, it is a support vehicle for the local community and we are proud to be able to join the team. The work thatCITC carry out in support of local people is crucial.”

Mike Green, Head of CITC, said: “is just the start of what is sure to be a great partnership with ICP networks organisations over the next three years.

The prospect of delivering our health and education projects on the new tablets is hugely exciting and this will transform the way our young people learn. The support of partners like ICP Networks is invaluable to City in the Community’s work in Greater Manchester.”

For all media enquiries contact Onside PR at ICP@onsidepr.com