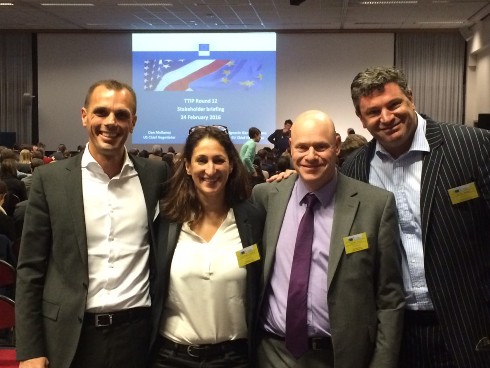 The Managing Director of Poynton based ICP Networks is part of a stakeholder group commissioned to thrash out a Transatlantic Trade and Investment Partnership.

Archer has addressed a previous round of the talks, now entering their 12th session, as the businesses on both sides of the Atlantic strive for agreement.

Archer, said: “The talks will help pave the way for a Transatlantic Trade and Investment Partnership or TTIP between the EU and US.

“We have been discussing three key parts of the agreement including market access, regulatory cooperation and the rules.

“I am personally a very passionate supporter of the ‘Britain Stronger in Europe’ and the benefits we all derive from being EU citizens and the business opportunities this provides companies like ours who trade in Europe on a daily basis.

“It is further complicated for me personally given I was born in America but have lived in the UK for nearly two decades and as a British Citizen now I consider myself to very much a Brit now running a very British business.

“For businesses like ours that trade in Europe the successful conclusion of the TTIP negotiations as well as the UK remaining in Europe is crucial to our joint future success.” 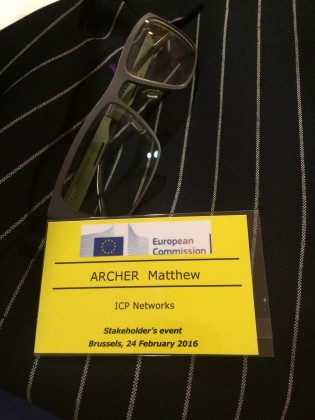 Archer’s business ICP Networks trade IT and Networking equipment to businesses in Europe and around the world.

There are incongruences between the US and European regulations and laws that disproportionately favour US companies or indeed larger organisations as a whole as opposed to SME’s.

The 12th round of talks was held in Brussels this week and heard from Stakeholders including Archer.

Stakeholders had the opportunity to explain their views on TTIP related-issues to EU and US negotiators, and other interested stakeholders. Members of the press also attended.

The Commission is proposing a new trade and investment strategy for the European Union: ‘Trade for All”. The new approach builds on Europe’s excellent trade track record.

More than 30 million jobs already depend on exports outside the EU. 90% of future global growth will happen outside Europe’s borders.

Archer added: “The new strategy will make trade as a whole more effective and that will create more opportunities, which means supporting jobs in Europe.

“The new approach is also a direct response to the current intense debate on trade in the EU – including on the Transatlantic Trade and Investment Partnership (TTIP).

“It is also an implementation of the Juncker Commission’s pledge to listen and respond to EU citizens’ concerns.

“It will involve trade policy being more effective at delivering new economic opportunities; more transparent in terms of opening up negotiations to more public scrutiny and address not just interests but also values.

“The new strategy addresses all these principles. It also lays out an updated programme of negotiations to put them into practice.”

With transparency a key part of the trade debate, the Commission has consulted widely in preparation of the communication, meeting with hundreds of organisations representing civil society and government representatives in Brussels and national capitals.

Matt added: “I was very pleased to be able to share my views on SME’s in the EU to the stakeholders and members of the respective delegations.

“I remain very hopeful that progress in harmonising regulations between the EU and USA will simplify and add efficiencies to the process that supports all trade and especially trade for SME businesses which as a group are the largest employers in the USA and EU.

“It was particularly rewarding to speak directly to EU Chief Ignacio Garcia Bercero and one of the lead negotiators Pedro Velasco Martins about the potential benefits of TTIP for SME’s in Europe.”

The Communication will now be considered by Member States in the Council and by the European Parliament, as well as by the European Economic and Social Committee. The actions will be implemented over the course of the current Commission’s mandate.