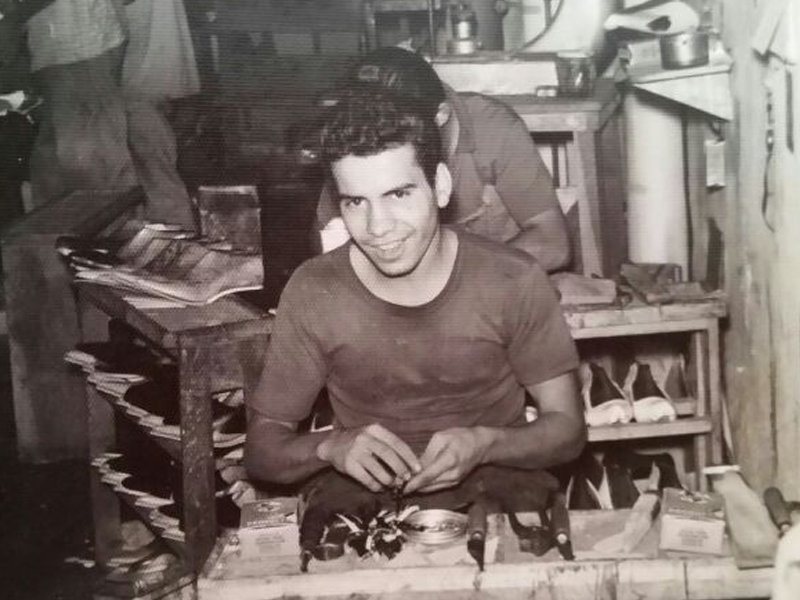 The contrast is not lost on Jeancarlos Calo.

From his desk inside Lexicon House the Venezuelan born Italian can cast his eye across the ICP Networks sales room, out through the triple glazed windows and across the state of the art warehousing facility.   Jeancarlos being a native speaker of Italiano and Español naturally he looks after ICP Networks Spanish and ICP Networks Italian clients.

Praised by the media and lauded by dignitaries including MP David Rutley the £1 million purpose-built Lexicon House has been called the ‘Greenest IT HQ in Britain.’

It is a long way away from the factory Jeancarlos grew up in – 4,820 miles to be precise.

Most of his childhood was spent in and around a factory in Caracas, Venezuela, the epicentre of his family owned shoe business – but it was not quite as sophisticated as ICP Networks’ award winning building.

“It is quite a contrast to the factory my family grew up around,” Jeancarlos or JC as he is known to his new ICP Networks family quipped.

“My family actually lived in the top section of a rented warehouse my father Angelo Calo rented for his shoe making business.

“At first it was just him on his own as he saved up enough money for the rest of his family including my Mother, Grandmother and Uncles who all eventually joined him.

“Eventually he was able to purchase the warehouse and he converted the top section into an apartment for all of the family with separate rooms until eventually they moved out and bought a flat close to the factory where I was born.”

Jeancarlos family story is fascinating. His father Angelo left the family home in the early 60s looking for work.

He left their village of Molfetta in the South of Italy and travelled some 5,600 miles to Venezuela determined to find a way to support his extended family.

“He was from a large family, the big brother of seven and decided he needed to try to make a business so he went ahead of my mother and the rest of my family to start something from scratch.

“He started cleaning shoes in the streets to try to make some money and developed quite a bit of knowledge. Then my grandfather followed him from Italy, then my grandmother and eventually the whole family.

“Everyone in the South of Italy from Puglia to Sicily have some knowledge of shoes and leather in general. He started to work on his own, then with my grandfather they opened a really small place in an industrial part of Caracas the capital.”

The Calo shoe empire grew quickly and the area around their factory grew to resemble a small Italian town as large families of multiple generations flocked to Caracas.

Yet despite the happy childhood Jeancarlos knew from an early age that the shoe business was not for him after the factory was closed down after his father passed away.

He added: “My Dad died in 1998 and my brothers, who were his partners in the business, decided to close it and they all went their separate ways.

“I’d never been interested in the business so I studied and my Godfather Cataldo Accela said he would pay for me to study at University. He is very Italian, like the character the Godfather in the movies, a big guy and he doesn’t talk too much. He said he would help me if I choose a proper course to study.

“I actually wanted to become a pilot but I knew he wouldn’t pay for me to do that! Instead we settled on accountancy. I studied at University in the morning and then try and help my Mum in the afternoons.

“My Mum Antonia Marzocca was a typical Italian woman. She used to stay at home for the kids but after my Dad died we struggled. She made pottery and food for the offices and I started to help and eventually I got a job so I could help her.

“I worked in accounts but later moved across to sales which meant I was earning more money included commission before I moved to a business that imported beef to Venezuela.

“I won a scholarship to go to Argentina but a month before I was due to go I turned it down because it meant leaving my Mum on her own and sadly that meant I had to leave the company.”

Jeancarlos’s mother died three years ago and her passing provided a window of opportunity to travel. The decision to turn down the move to Argentina had been his own choice but it had stirred thoughts of life away from Venezuela.

“From nowhere really my girlfriend and I decided we would come to the UK and learn English for six months,” JC added.

“She was able to take a break from her job and we planned to stay for a short period and return but at the end of the six months we realised how safe we felt and we didn’t really want to go back. Caracas is the most dangerous city in the world right now.

“We knew that would mean starting at the beginning again as no-one knew us. She loved her job but felt safe here and rather liked the fact that you can walk through the street without someone trying to kill you!

“We can cope with a bit of rain so we decided to give it a go and we enrolled at college to learn English. I worked part-time at Old Trafford in the VIP bars because I knew it would force me to speak English and in the end we knew we wanted to stay.”

Jeancarlos and Beatriz Pardo choose Manchester as their home but JC found himself living in Derby Monday to Friday working with a business selling IT products.

He added: “I really enjoyed working for the company and threw myself into the job learning so much about the products, the equipment and building contacts but it was hard being away from Beatriz in the week.

“I was searching for a way of combining my love of the job with the love of my family and then the opportunity at ICP Networks emerged.

He added: “Everything happens for a reason and when I had the opportunity to join ICP Networks I jumped at the chance.

“Sales in the UK is so much easier as it is digital. In Latin America it is so slow. If you want to make a sale you have to go there to talk to the guy, take a coffee or eat and drink with him just to make a sale. It is so much slower.

“I love the idea of working for ICP Networks. I like the way they do business and speaking three languages means I can develop the business in Italy and Spain. It makes for an exciting future.

“It has been like joining a family. They made me feel so welcome from day one and now even my girlfriend is jealous because I never stop talking about ICP Networks.”

And would his father have approved of ICP Networks and Lexicon House?  Jeancarlos added: “He’d have loved it, especially the solar panels as it would have meant we would never have had any energy bills! He was quite the businessman but he might have thought about turning the boardroom into a bedroom with ensuite just in case!

To talk to Jeancarlos about opportunities in Italy or Spain contact him via: jeancarlos.Calo@icpnetworks.co.uk